For Farm and Fatherland? Claiming German Property on French Territory after 1945 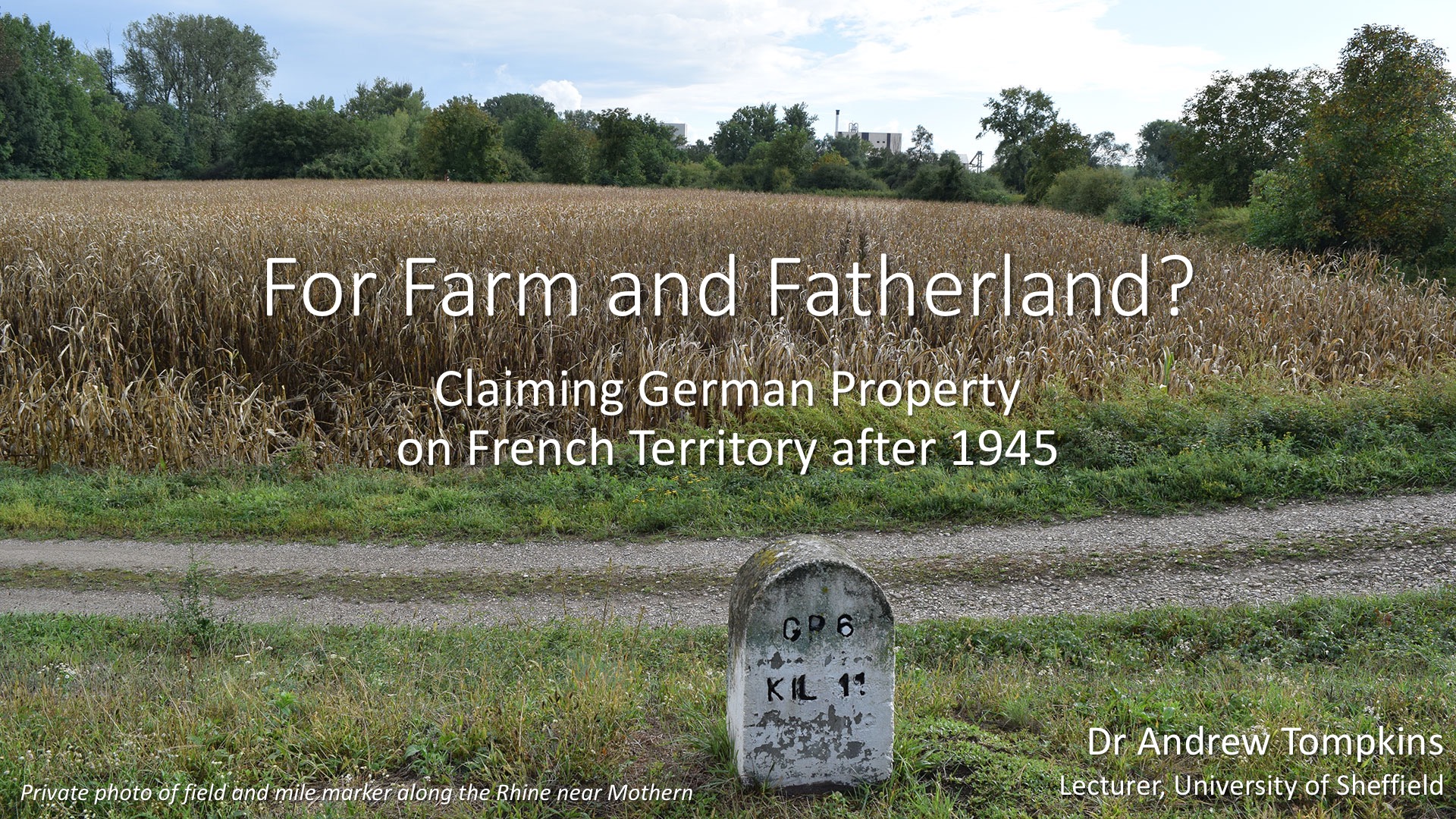 Presented at the ‘Managing the Land’ workshop at the European University Institute in Florence, 11 April 2019.

Abstract: In the aftermath of the Second World War, Germans in the Federal Republic were fixated on territorial losses east of the Oder and Neisse Rivers as well as on the division of their country’s remaining territory with the hostile German Democratic Republic. However, West Germany also suffered smaller territorial losses to the Netherlands, Belgium, Luxembourg, and France that split the landholdings of some 2,294 farms – nearly as many as along the border with East Germany (2,318). When neighboring states blocked access to these lands, the affected German farmers had few other options but to involve the West German state, with the result that local conflicts over property rights quickly escalated into international disputes that became considerably more intractable.

Nowhere was such conflict more enduring than between Schweigen (West Germany) and Wissembourg (France), where the local French administration sequestered German-held farmlands in Alsace as part of a bid to secure drinking water, forestry, and hunting grounds from an adjoining, uninhabited German forest. With both sides dependent on access to immovable resources in a shared environment, local actors who were relatively powerless on their own sought to harness state power to gain the upper hand. Local relations were, however, frequently illegible to the state, owing to informal repartitions of land that had rendered cadastral records obsolete. In this situation, German farmers in particular had few means with which to convince foreign authorities of their claims. They thus pursued a variety of different options to draw West Germany into dialog with France over the issue, alternately pleading with the Federal Chancellery and threatening unspecified actions to embarrass it, arguing in the name of “Reichsdeutsche” as well as of “Europe,” and drawing explicit comparisons between alleged land grabs by France and by Poland. The conflict was not ultimately resolved until 1986, meaning that these property and territorial claims between Western allies dragged on for nearly as long as the Cold War itself.

Over time, the conflict over Schweigen farmlands and the Mundat forest evolved from being about the livelihoods of local farmers to becoming a proxy for larger claims about the postwar settlement and Germany’s place in (Western) Europe. This paper will examine the conflict with a view to showing farmers’ changing and ambiguous relationship to the West German state as well as how inter-state relations played out on the ground. As Sagi Schaefer (States of Division) has argued in relation to the German-German border, local farmers did increasingly stake their claims in the language and terms of authorities, thus contributing to state-building processes in a peripheral region. However, along the French-German border, discourses about the Cold War were deployed in ways that allowed for easy continuities with past German expansionist claims towards both Eastern Europe and France. Furthermore, changing inter-state power relations carried over into local conflict, with Schweigen farmers’ initially weak position vis-à-vis Wissembourg authorities later bolstered by West Germany’s growing economic might.